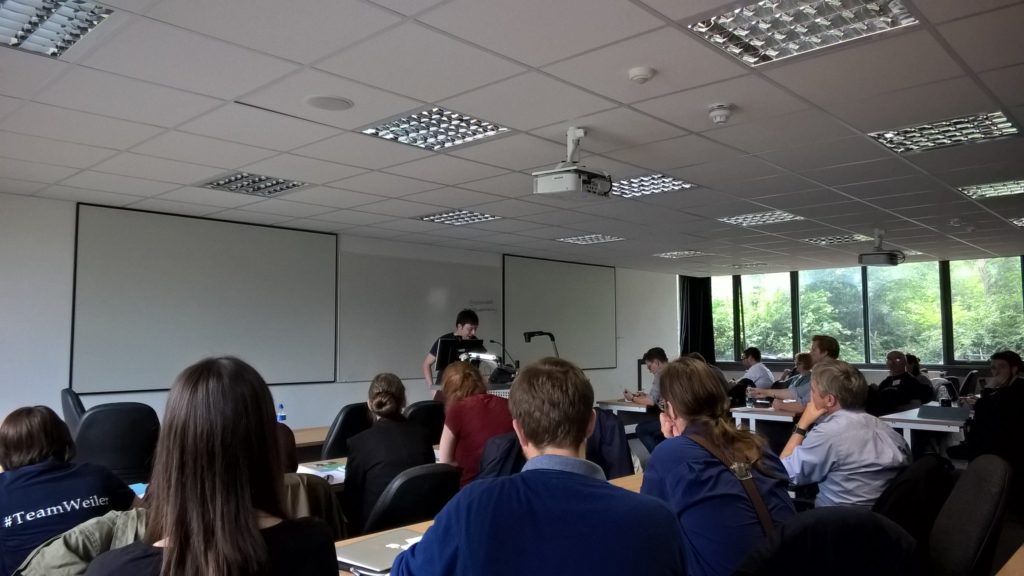 Reconstructions of the past – in genres as diverse as chronicles, poetry, saints’ lives, genealogies, diplomatic treaties, and language itself – all provide a gateway into the political, intellectual, social, and cultural life of high medieval Christendom. At Aberystwyth University, under the auspices of the Centre for the Study of Historiography and Historical Culture, we were fortunate to welcome a truly international range of scholars and postgraduate students to a conference exploring the themes of Power and Identity using those sources.

The three-day conference saw the delivery of 28 papers and keynote lectures, with research spanning the entire geographical and chronological breadth of high medieval Europe. Our keynote speakers set up and addressed the conference themes from unique angles but each with great dedication and a fascinating set of examples. The conference papers themselves were given by postgraduate and early-career researchers drawing upon research-in-progress. Through the broad range of case studies provided, we discussed how authors reconstructed the past, their reasons for doing so, and how they situated themselves in relation to time – their perceptions of the past, present, and future. Felicitas Schmieder’s discussion of the Alexander Minorita’s Expositio in Apocalypsim demonstrated how an author’s interest in the past varied from period to period, as well as the importance of the Bible as a model for prophetic and salvation history, and the difficulty of applying labels, such as ‘historiography’ or ‘exegesis’, to such a complex and multi-layered texts. As became clear from many papers, high-medieval writers were often political commentators. Martin Aurell, drawing upon accounts of the 1173-4 revolt against Henry II, highlighted how contemporary chroniclers offer ‘tantalising glimpses’ into wider social attitudes, especially towards otherness, gender, kinship, and political theology. His lecture also demonstrated the importance, for our research, of engaging explicitly and directly with apparently modern concepts, such as propaganda. Whilst contributing to ideological, cultural, and, above all, moral debates, medieval authors, at the same time, also valued the past, like their modern counterparts, for the inherent fascination it provides. The remarkable influence of classical models, and the now much-maligned art of rhetoric, was elucidated brilliantly by Robert Ireland in the opening keynote lecture. Medieval authors engaged with this colossal textual and ideological inheritance, but with a creativity and flair designed to suit their own purposes. The texts discussed by our delegates also often sought to strengthen a sense of identity – whether ethnic, dynastic, institutional, or religious in nature. The difficulties of defining the concept, and indeed measuring the influence of our texts, was fruitfully discussed. As Piotr Gorecki highlighted, in his lecture on stories of bad rulership exhibited by Polish dukes, the very act of interpreting the past, by our authors, played no small part in the formation of their own  identity and self-perception. Thus, while fundamental similarities emerged across the papers, the importance of the specific context of each historical and literary production was a striking theme throughout the conference. Piotr also sent us a great testimonial after the conference, which can be found here.

Our moderators (Ben Pohl, Erik Niblaeus, Charlie Rozier, Rhun Emlyn, Philipp Schofield, and Grischa Vercamer), the ever-patient and helpful postgraduate volunteers (Nathan Greasley, Caitlin Naylor, Kiri Kolt, and Abigail Monk), the departmental staff (Nicola Gower and Rebecca Rock), and Björn Weiler, all worked assiduously to forge the atmosphere in which the conference took place. The papers were presented in a consistently enthusiastic, warm, and friendly environment with highly constructive, and detailed, scrutiny and criticism with an audience deeply and energetically engaged with the research presented. For a conference aimed at providing feedback to postgraduate researchers, in particular, this was very much appreciated. All 24 postgraduate and early career papers were notable for the clarity of presentation and the strict adherence to time keeping (helped by Björn’s purchase of the quickly nicknamed, and much feared, “Bell of Doom”). The Ship and Castle pub, the conference’s “home away from home”, provided an ideal venue for further reflection and contemplation. The delegates continued to socialise and discuss the conference themes long after the official conference programme was complete, with many of us travelling to the International Medieval Congress, Leeds on the so-called ‘Party Bus’.

We are exceptionally grateful to several organisations for making this wonderful event possible. We would like to thank the Graduate School and the Department of History and Welsh History for their generous support as well as both the Royal Historical Society and Medium Ævum for enabling us to offer travel bursaries to each postgraduate who requested them and for enabling us to exempt postgraduate speakers from registration fees. We are delighted to announce that a follow up conference will take place next year on the theme “Where did you come from, where did you go? Origin Narratives and the History of Peoples, Places and Ideas”.

Ryan Kemp organised the Power and Identity conference and is an AHRC-funded PhD student supervised by Björn Weiler (Aberystwyth University) and Sarah Hamilton (University of Exeter), working on kingship in twelfth-century English and German saints’ lives and bishops’ biographies.

Theme by Anders Norén — Up ↑

This site is part of Humanities Commons. Explore other sites on this network or register to build your own.
Terms of ServicePrivacy PolicyGuidelines for Participation